Angry Robot News: Scraping Myself off the Ceiling

The Angry Robot reader gave a big thumbs up to Channel Zilch:

I hope this makes your day – I will be putting Channel Zilch through to Marc and Lee [heads of Angry Robot]. It’s certainly one of the most unique styles and voices that I’ve read in a story! I do think it’s a very Marmite way of writing, so either people will love it or hate it. I loved it, the boys may not, but we can only try.

From here on in it goes into a standard submission procedure. Don’t expect to hear anything for at least 8-10 weeks, if not longer. Both Marc and Lee will read the novel and both have to give agreement before it goes in front of the Osprey/Angry Robot marketing board, who also have to give agreement. There are still many hurdles to jump but you’ve cleared the first.

I love her description of my writing style as Marmite: strongly flavored; you either love it or hate it.

CZ still has major hurdles as listed above, but this is another indication that it’s not complete crap ;^)

A much-needed boost! My health continues to scrape bottom. Just had to cancel a trip to Philly for my Mom’s 80th because I’m too sick right now. I doubt that I will accomplish much on Castle Rising this month.

Another small step on my arduous but inevitable journey to the Nobel Prize for Literachewer!

Next step: Write the MarmiteStyle Manifesto.

Goodbye Shuttle program. It was a long expensive detour on the road to space. Thanks for giving me shuttle Enterprise to star in Channel Zilch. Thanks to all who worked hard on the program. All honor to those who gave their lives in Challenger and Columbia and in accidents on the ground.

This following tribute to the heroes of space travel is a chapter from Channel Zilch that I had to cut from the book. I’ve excised some plot passages. The narrator is Mick Oolfson, ex-NASA-astronaut, who is planning to steal prototype space shuttle Enterprise and launch it with a Russian booster.

The Columbia crash nearly stops Channel Zilch before it starts.

February 1st. I hear the news. A shuttle died. How can we think to launch Enterprise now?

Seven astronauts died. I knew two of them.

They would have wanted us to keep going – a truth that keeps the whole world from grinding to a halt with grief every time one of us dies.

I’ve said and I’ll say a few unkind things about NASA in this book. Let me put things straight right here and now: NASA covered my back every second of my eighteen days in space. Show me an organization that has more dedicated, skilled, and passionate people than NASA.

It’s a miracle every time a rocket makes it into space. A million interworking components riding a howling flame. Every launch is a triumph for every one of those who makes it happen.

Over one hundred successful launches. Two lost crews. A 98+% success rate at the hardest feat on earth. Never good enough, especially to all the people on the ground who worked to get us up and back.

I can’t list every person who gave their life to lift us into space. Astronauts die but risking our neck is part of the job description. Our deaths are news and millions mourn.

No one knows how many died on the ground building, maintaining, supporting, training. I’ll let these two stand for all those unsung heroes:
Columbia – March 19, 1981
John Gerald Bjornstad
Forrest Cole

Remember those who gave it all.

This picture has been my laptop wallpaper for the last many years as I worked on Channel Zilch: 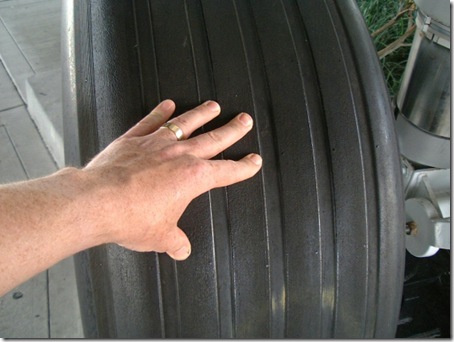 I am touching a space-flown Space Shuttle wheel on a shuttle replica at The Cape. I made sure that in Channel Zilch the protagonist, Mick Oolfson, touches the tire of Shuttle Enterprise when he first sees it.

That picture worked its charm and now I can retire it because I’ve finished Channel Zilch. It’s on to Castle Rising, my medieval-kids-vs.-alien-armada book, so I changed my wallpaper to inspire me with views of the homes of the four protagonists: 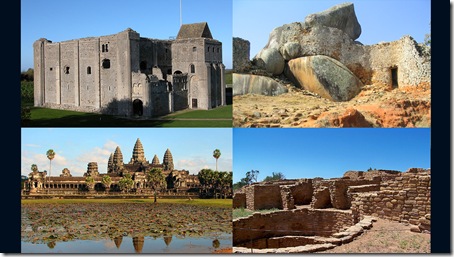 Upper left is Castle Rising in Norfolk, England, the home of Will the apprentice scribe. Lower left is Angkor Wat, home of Visel the reluctant martial art student. Lower Right is the Far View Site at Mesa Verde in Colorado, home of Avis the hunter. Upper right is the Hill Complex of the castles of Great Zimbabwe, Zimbabwe, home of Shenkasi the prince.

End of a Long Winter

This winter has been by far the longest and snowiest since I moved to The Pad 7 years ago. Last year I was canoeing by March 19th – Martel Lake is still iced tight.

It was a social winter. Casey Muratori flew out from Seattle and survived a subzero week. We had some great snowshoeing expeditions. I taught him how to make coffee and bake bread and he diagnosed my broken desktop computer (fritzed monitor) and set up an Amiga.

Casey as the Ice Ninja

We spent a couple of raucous evenings celebrating my 59th birthday with Brook and Stephanie at their lovely home.

Myrna Mae Berg came to The Pad to celebrate my birthday and to take pictures for my itsu jitsu moogy-woogy album, Boogafoo Music.

I got some great Channel Zilch news. Angry Robot Books opened for unagented submissions in March and so I sent them the first 15k words of CZ. A few days later I got email:

Thank you for submitting a sample from Channel Zilch. I enjoyed what I read, and would like to read more. Please send the full novel to XXX@angryrobotbooks.com in Word, RTF or PDF format.

WOOHOO! I spent a few days editing the manuscript and sent it to Angry Robot. Checking my email is rather thrilling as I await their response.