My improbable “music” career continues to amaze and amuse me. Yesterday I got email from a Spanish fan alerting me to his review of Boogafoo and Pink Toads.

Google Translate assures me that the review says:

In the mid 70’s, a man named Doug Sharp let his young fingers on a Moog synthesizer play, finding ways pitched noise, full of intensity oscillations, which remained secret for decades, kept on tape until scanning XXI century. BOOGAFOO MUSIC (Itsu Jitsu, 2011), particular definition provided by her daughter, is eaten as a rehearsal for massage hallucinatory ears open, which gives two pieces that exceed 13 minutes, “Opus # Glork, Move 2” and “Schveltronia Bimmsler études, “sequenced together with other shorter. Underline also “Wasp train”, a playful track that moves like a locomotive difficult to pinpoint. Look to the right was saved …

Sharp does not stop to rescue these old keys, but proposes very new lines of flight, more puzzling, in Bite-Sized 5 Dozen Sonic Sculptures One (Itsu Jitsu, 2011), EP opening of a saga that will extend to 5, to be reissued in a box complete with a remix album. The dozen exhibits sculptures of yore as “fip fip Peodopular” the same track that closes BOOGAFOO … intersection that leads to an outbreak of glitch-hop (“Kuul”), the elusive rock of “Complicated”, kinematics for pissing of fear of “Citizen Sane” or IDM with muriatic acid to “Skink gobblers.” Among these miniatures (only two exceed the minutes) stand a “Metal on Metal” that strikes true, and “Down on the Pharm” or the base that Michael Jackson had worked in the case of pop to avant-garde. Investigations are appreciated.

I hope some of my Spanish/English-speaking friends can refine this translation. I love the fact that my music “is eaten as a rehearsal for massage hallucinatory ears open” and that “Sane Citizen” is “kinematics for pissing of fear.” Those are both valid comments about my music.

Entries continue to pour in for the 5 Bite-Sized Sonic Sculpture remixes. Hox turned in a wild and wooly remix of the whole album that he calls (poetically) “4:33:”, which he describes as “Result is like a demented drama micro-opera with a further more demented soundtrack.”

I’ve got a track on the ALTERED STATE OF MIND compilation. It’s a fairly long, dark track called “Oppressed by Dreamdark” because it was turned down by the Dreamdark label for being too dark and dreamy.

Here’s a picture of some Lily Pads in Sunlight for all you nature fans:

My health is still scraping bottom but I am a lucky man because I can rest to recuperate.

Next week I do some querying to capitalize on the fact that Angry Robot is looking at my full of Channel Zilch.

I Got a Deal with a Publisher!

Not a book publisher but a music publisher, a plucky little Glasgow-based “netlabel of sorts” called itsu jitu. Jason Kavanagh, owner of itsu jitsu, asked if he could publish some very old, very odd music of mine after he fell in love with it on last.fm: http://www.last.fm/music/Doug+Sharp

In 1974 while I was attending St. Olaf’s Paracollege, my best friend Larry Heyl ran the Moog Studio. He taught me how to plug in patch cords and fiddle with nobs to wring squawks out of the Moog Modular Synthesizer: I was getting a hand-rolled degree in Creative Studies so I decided that spending hours torturing a Moog was part of my curriculum. I created a handful of tracks of the weirdest sounds I could pump out. I called my album “Babie’s[sic] First Words” and kept the reel of 1/4″ tape even though I didn’t have a reel-to-reel player.

I carried the reel around for years before digitizing it and making a cassette for the car. When Margaret arrived on the scene I’d occasionally play the tape for her. She aptly named it Boogafoo Music.

My music-listening website is last.fm, which lets anybody and their dog post original music. One night in Oct. ’09, in a fit of enthusiasm, I whipped up a silly album cover and uploaded Boogafoo Music, describing it as “highly effective rodent repellent.” 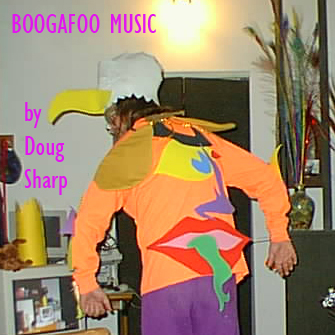 People began to listen to it, which amused the heck out of me. I’d check the Boogafoo Music listener page and giggle that someone in Ireland or Sweden had actually listened to one of my odd, 3-decade old musical effusions.

People began to “friend” me because of Boogafoo Music and one friend wrote to me  last July:

Would it be possible for you to send me a copy of the Boogafoo Music cover image so I can add it to the mp3’s for my media library?”

I was flabbergasted! This guy was a musician himself and a real fan. We started corresponding and I let him know that I had more music and had written a book called Channel Zilch. He was happy to listen to and read my stuff. I followed his listening habits on last.fm and could see that he was indeed subjecting himself to my music on a regular basis.

Margaret and I recorded Pink Toads in 1998. In 1997 my epilepsy flared up and I had to stop working at Microsoft. In the next years I tried desperately to find creative outlets. I had a nice little studio, which I hoped to make into a daughter-father game studio, and so Margaret and I made an album of freaky music we called Pink Toads by Zilch Spacecasting Network. Our music was heavily inspired by The Residents. Wikipedia says this about The Residents: “They are noted for surrealistic lyrics and sound, and disregard for conventional music composition.”

So I have 2 albums coming out from itsu jitu in the coming months: http://itsujitsu.wordpress.com/2011/01/07/new-itsu-jitsu-artists/

Pink Toads is coming out on Jan. 31! I had a blast making a cover for it:

The clay figures are from an Aliens-vs.-Flying-Dogs chess set Margaret and I made.

I’m having a great old time “working” with Jason. itsu jitsu is even hosting a competition to make a movie video for one of the tracks on Pink Toads. Jason says he’s going to put contest flyers up at all the hip artiste watering holes in Glasgow. I look forward to pix and will post them here.

Thanks last.fm! What a huge win for social networks!