My Improbable and Delightful Music “Career”

WOOHOO! I made over $10 in the last 5 months from people who paid real money for my peculiar “music.” I’m sure that most of that largesse came from sympathetic relatives but the crucial point is that I lost my amateur status so I’m a professional musician now ;^) ! Fear me, Lady Gaga!

I’ve related the saga of how the perspicacious itsu jitsu netlabel mogul Jason Kavanaugh exercised his mad A&R skillz to lift me from well-deserved musical obscurity into the bigtime of 2-figure royalty checks. Jason encouraged me (as he has encouraged so many real musicians) to make another album – my first since 1998’s megahit Pink Toads – and I blurted out the first title that popped into my head: 5 Dozen Bite-Sized Sonic Sculptures. (Yes, I’m a pretentious artsy poser.) I hoped that even with my neural limitations I could make tracks that were under a minute in length.

So, despite all odds, after having survived 59 orbits of the sun,  I finished the first dozen tracks of my wacky plunderphonic wankery and itsu itsu released them as an EP last week:

WARNING: 5DBSSS is always odd, sometimes harsh. You probably won’t like it. It is not an acquirable taste.

I’m thrilled that some people, including some talented musicians, get pleasure from my sonic curios. Eight actual musicians – so far – have offered to remix 5DBSSS tracks. Jason K. plans to include remixes in the final release of 5DBSSS. It’s a kick to hear other musicians refashion my music in their own styles.

The first to send me his remix was Macedonian guitar scorcher fydhws. fydhws likes 5DBSSS a lot as his last.fm listening record shows. My favorite fydhws track is his anthemic “-=7+1”.

Despite the damning counter-evidence of 5DBSSS I do love music. I played a mean French Horn in the Midwest City, Oklahoma Monroney Junior High Marching Band but I hocked my horn to buy parts for my dead VW bug. I’m at best  an enthusiastic amateur (despite my pro status ;^). I’ve got no instrumental skills although I intend to take lectric geetar lessons and play exactly like John McGeouch (insert jocular emoticon).

My “instrument” the lets me “lay down sick tracks” is the audio software Reaper.

Here’s where the improbability approaches infinity: Jason K. claims that my ancient and peculiar sonic extrusions – Pink Toads and Boogafoo Music – actually influenced his current music, which is superb stuff – over-the-top, complex but musical, exuberant, and a ton of fun.  I never get tired of listening to his music. Jason has become a great friend and he recently wrote me:

I’m glad that you’re feeling inspired by my stuff as I know that I am by yours. Both Pink Toads and Boogafoo have prompted me to break out my VST synths again (wish I’d now kept my hardware ones) and also to start jamming my words onto tracks without worrying too much about my silly Scottish voice. In all honesty and with hand on heart those two albums and Hox’s stuff have been the biggest influences on my music for the past year or two. From awaycaboose through my intermediary pseudonyms and on to Gondowanland has been the resulting progression and I have to say one which I’m really happy with. The internet again, great for meeting like minded folk and through that learning, exploring and growing. Yay!

I still giggle when I read that. The amazing thing is that I can hear the influence of Margaret’s and my music on Jason’s music: an exuberant, what-the-heck-it’s-only-music, all-our-knobs-start-at-11, spontaneous yet dense style. Jason owned a record store in St. Andrews, Scotland for 5 years so he has listened to a lot of music. Yet somehow he’s voluntarily listened to Zilch Spacecasting Network and Doug Sharp tracks over 500 times – which boggles me.

The Blasted Muffins describe themselves as a Glasgwegian/Venezian experimental supergroup intending to take over the World one weird tune and odd, unsettling video at a time.

CYGA by The Blasted Muffins from their album Godspeed You, Chocolate Albino!

On the Blasted Muffins YouTube page scroll down and look at their list of influences. To my delight and astonishment Doug Sharp is listed (right after Bo Diddley!)

Thank Gore for the Internet! There are a billion humans on the Internet and perhaps 47 of them have the mutation that enables them to endure my “music”. You may have heard of the Internet market’s Long Tail. I made my $10 by riding a flea biting the tippy-tip of that appendage.

I love the fact that lots of musicians now send me their new tracks to listen to. One of my strengths in musical PR is that I love to make last.fm comments on the tracks I like. Musicians appreciate verbal enthusiasm for their tunes.

I’m still feeling low from brainrot and increased seizure meds, so indulge me as I toot my own horn by quoting some listener comments about my music:

“Crazy and noisy music or… I don’t know how to call this music ….. because this is just perfect for going out of limits and having a magical experience , thanks dougsharp for sharing .”-StelleAmMund (Mexico)

“Somehow, Mr. Sharp found the ungettable collection “The Lost Recordings from The Residents Early Era” and decided to give them the proper, deserving, treatment for our listening pleasure. Thanks.” – fydhws (Macedonia)

“It is a privilege to have been transported to the solar system of Boogafoo Music.” – Bloopy (New Zealand)

“Tortured noise for tortured minds. Thanks a lot for sharing your music with me.” – Raphdabumbling (France)

“your music is awesome!” – juansebastianpj (Spain?)

“5DBSSS is also fantastic. i like your bloops, etc. good stuff.” – ButSheDontCare (USofA)

Dang, that feels good! Even though I still can’t believe the fact that actual human beings listen to my music without guns to their heads.

I’ll never make real money with my ultraweird music, but I love making strange little tunes. My goal is to break into the high-paying sci-fi author racket with Channel Zilch. I love the fact that I can scribble a few pages of my lapidary prose in the afternoon, rest, and knock out a tiny track in the evening without tiring myself. It feels good to use nonverbal neurons.

The Turbogrind Terrorizers have promised to let me ride their coattails to musical fame. They’ll let me stand on stage with them, play an unmiked tamborine, and lip-synch. I plan to corner the market in 59-year-old groupies.

LOL! Minutes after I published this post I got a message from Vince “Percival” Gauthier-Bradner better known as Corroded Master. He and I joke around on Facebook. He has honored me by naming an album and wicked bass track in my honor: “Why doug’s insolence has offended me and how he has increased the darkness in my soul, killing me slowly.” What a hoot!

Boogafoo Music, my Moog-woogy album from 1974 is now available from itsu jitsu! 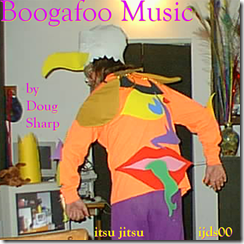 In 1974 while I attended St. Olaf’s Paracollege, my best friend Larry Heyl ran the Moog Studio. He taught me how to plug patch cords and fiddle knobs to wring squawks out of the Moog Modular Synthesizer. I was earning a hand-rolled degree in Creative Studies so I added torturing the Moog to my curriculum. 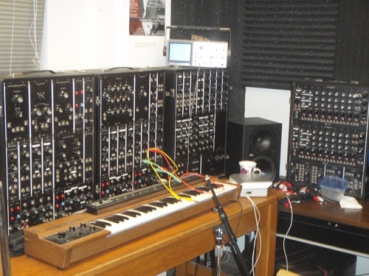 Moog Modular Synthesizer like the one in the St. Olaf Moog Studio

To me the Moog was a machine for making weird noises so I pushed it into uncharted territories of sonic strangeness. I didn’t emulate any musician but indulged in pure sonic experimentation. I taped a handful of tracks and called my album “Babie’s[sic] First Words” Twenty years later my daughter renamed it “Boogafoo Music”, which stuck.

I carried around this 2nd-gen tape for years before digitizing it, no charge for the tape hiss

We kept track of our Moog patchcord setups with this worksheet